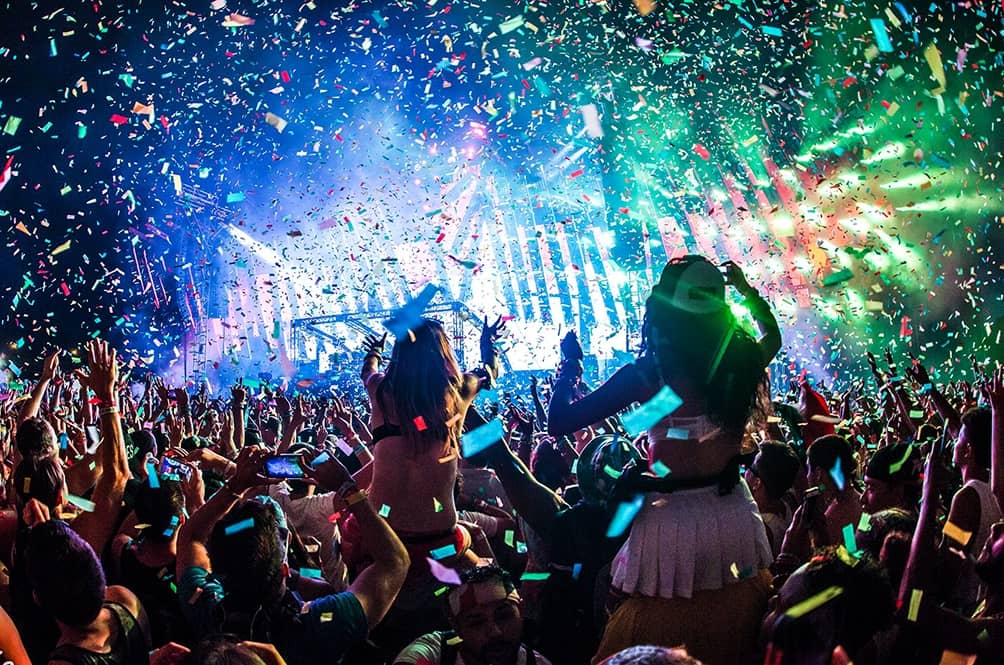 While there has been a multitude of truly spectacular stage performances that span the decades, there are some that stand out from the rest. From the weird and wonderful to show-stopping stage productions, here’s a roundup of the most memorable festival performances to date:

Dave Grohl has since commented that he thought Nirvana’s headlining gig would be the end of their career. Quite the contrary, the band’s performance at Reading made music history and is often considered one of the greatest festival performances of all time.

With the onslaught of rumours surrounding Kurt Cobain’s unstable health, many had feared that the band would be forced to cancel the show. In retort to his hostile critics, Cobain made his entrance in a wheelchair, dressed in a surgical gown and a disheveled wig. After faking a dramatic swoon, the eccentric front man lead the band through an electric set, enthralling excited grunge fans right to the very end, where he finished the set by handing over his guitar to a member of the crowd.

Known as the moment that marked a conscious shift in artistic direction, Bob Dylan’s 1965 Newport performance sparked controversy amongst his most dedicated fans. Armed with a Fender Stratocaster, Dylan unleashed his first ever electric guitar set with trending playlists, much to the Newport crowd’s dismay.

Throughout the set, Dylan was booed and heckled by dedicated folk-fans who disapproved of the musician’s decision to abandon his authentic folk origins and deviate from his well-loved acoustic sets of ‘63 and ‘64. Despite the hostile reception from his core fanbase, Dylan’s ‘plugged in’ debut has since been recognised and celebrated for breaking down the barriers between two distinct music genres.

Behind the scenes of Monterey Pop Festival in 1967 was a an ongoing dispute as to who held the title of the ultimate rock master – Pete Townshend from the Who or Jimi Hendrix. Once again, Hendrix’s charismatic stage presence and masterful guitar skills made him the star of the show. After smashing out an exhilarating set, the band’s superior status was instantly sealed in history.

To finish the 45 minute set, Hendrix kneeled down next to his guitar, doused it in lighter fluid and set it alight as a kind of celebratory bonfire symbolising his triumph in this epic rock battle. The image of the guitarist kneeling over his flaming guitar remains one the most iconic moments in rock and roll history.

Following the release of the critically-acclaimed Ok Computer, Radiohead’s 1997 Glastonbury performance marked their move into to the realm of the artistic greats. Masterful, moving and ethereal are just some of the terms that have since been used to describe their legendary set. A far cry from the usual spirited crowds that line the fields of Glastonbury, the band created an atmosphere that was almost mournful. With Jonny Greenwood’s mesmerizing guitar solos combined with Thom Yorke’s delicate harmonies, the performance was undeniably a game changer for modern rock music.

Ever since the lineup was announced in 2008, the very thought of having a US rapper performing at the UK’s biggest ‘rock’ music festival was enough to rile Glastonbury veterans into an disgruntled frenzy. Even Noel Gallagher famously condemned Jay Z’s prime position at the festival as ‘wrong’. In an impudent response to his criticism, Jay Z took to the legendary stage dressed in an Gallagher-style parka jacket and launched into an deliberately abysmal rendition of ‘Wonderwall’.

After a tour de force of his best hits, Jay Z officially managed to convert even the most traditional rock-fans into hip-hop enthusiasts. As the first ever rapper to headline in the entire history of the iconic festival, there’s no denying that Jay Z’s performance was a triumphant dismantling of festival boundaries.

If you’re feeling inspired by these memorable performances and are looking to buy tickets for the world’s most celebrated concerts in the USA, you can head to websites like Mozaart.