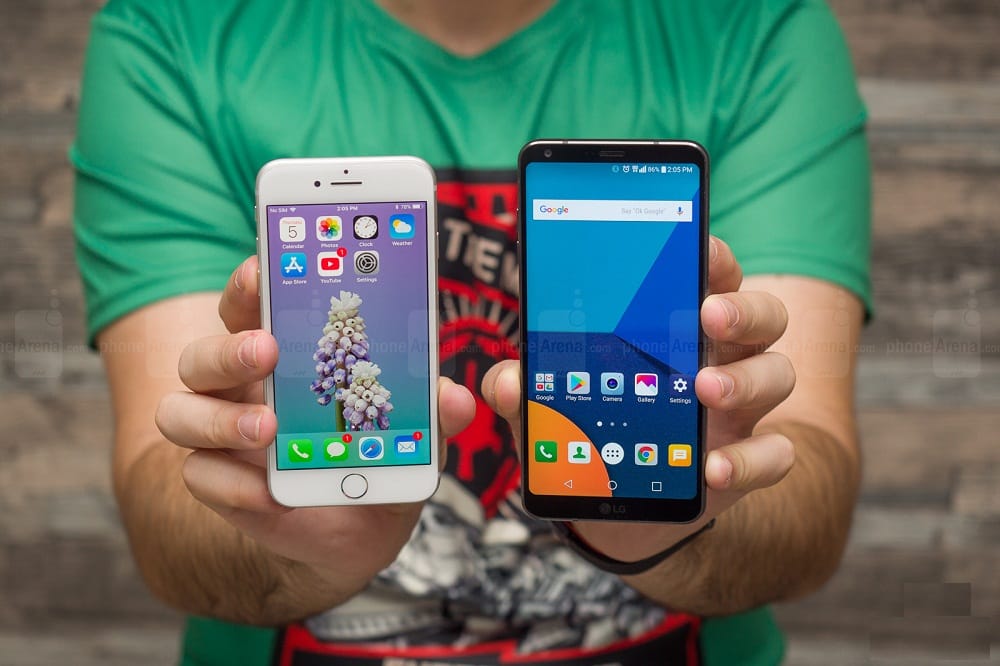 Smartphone cameras have rapidly improved over time thanks to technology. But they’ve also come to replace the average point and shoot camera for most people. The iPhone 8 Plus and LG G6 have 2 of the best cameras on the market. Which one is the best? This article answers that question by comparing them against one another.

This latest iPhone iteration offers an evolution for their camera rather than a revolution. As one of the best cameras on the market, it doesn’t need one. The most significant upgrade for the iPhone 8 Plus camera is the chipset. The A11 Bionic Chipset has a better image signal processor (ISP) in it. The result is a better texture in the photo when it’s taken. It has 12MP sensors, too.

The pictures are also sharper with and the background is less in focus even when not using portrait mode. Portrait mode is a little difficult to activate at first. To do so, it requires scrolling around the camera modes and then focusing on the subject before it activates. The results are impressive at times and sometimes a little average.

Photos taken in mixed dark and light situations come out quite well. In the average photo details get lost particularly in lower light but on the iPhone 8 plus, the details are much more intelligible.

The camera’s editor has also gotten an upgrade. Loop, Bounce, and Long Exposure are three new features this camera makes use of under iOS 11. The effects also get a boost here as well. Color and brightness allow people to make the changes to their photos that are simple yet effective.

An autofocus is also really good on the camera. For those that want to control the shutter speed of the camera, it might be too perfect because there’s no option to do so.

The video feature on this camera is also exceptional. The iPhone 8 Plus is capable of taking 4K video that looks clear and is really smooth. So, all in all, it has everything that the average user may want in a camera.

The LG G6 features two 13-megapixel cameras on the back and a 7-megapixel camera in the front. One is a 125-degree wide angle lens while the other, a bog standard 71-degree lens with an f/1.8. And f/2.4. Aperture respectively. It features an 18:9 Full Vision Display, this separates the screen into 2 parts. This allows the user to take a shot and see the previous pictures on the same screen.

LG’s camera app also offers a variety of options. People can choose between the two rear camera and different modes to take pictures with. Transiting between the two cameras is easy allowing two perspectives to be captured in an instant. It features the following modes: panorama, 360 panorama, food, pop out, snap, slow-mo., and time-lapse.

The G6 also has the manual photo and video modes allowing for the control of things like mic gain, audio crossover, exposure compensation, and ISO sensitivity. Like the iPhone 8 plus, the G6 is capable of 4K recording and also 1080P, Cinema, and 720P. It also has a lock exposure feature in Pro mode which is good for recording professional style footage while the phone is on a tripod.

It also performs quite well in mixed conditions and shows a lot of detail. The phone also features a dual LED flash. On other phones, it could prove to be a disaster. But it works the LG G6. Objects in the photos with flash appear natural and not washed out.

In terms of where the phone stands on the best smartphones on the market spectrum. It’s not quite the best. Despite having 2 13-megapixel cameras, it still doesn’t beat the Google Pixel, which currently has the best phone on the market.

Choosing which camera is better ultimately depends on what you want the camera for. If you’re a camera enthusiast, the G6 is a better option because it offers many features that allow you to take a good shot. It’s also more appreciated by people who like technology. There are many modes to take advantage of here.

The iPhone 8 Plus is a camera that is made for those who like taking photos and video in an uncomplicated way. Having to hunt down portrait mode aside, it takes good-looking photos with a fairly easy to use camera app which makes taking a nice looking photo a snap. But it too is not the best smartphone option on the market compared to other phones out there.

Both the LG and the iPhone 8 Plus offer great cameras. Since they are inside of smartphones, picking the best camera also includes an operating system in the decision-making process. But the good news is that the iPhone 8 Plus and the LG G6 both give iOS and Android users plenty to play with in terms of the camera.

About the Author: Noelle Neff is a writer, photographer, and blogger. She writes about her travel, technology and other topics on her website NoelleNeff.com