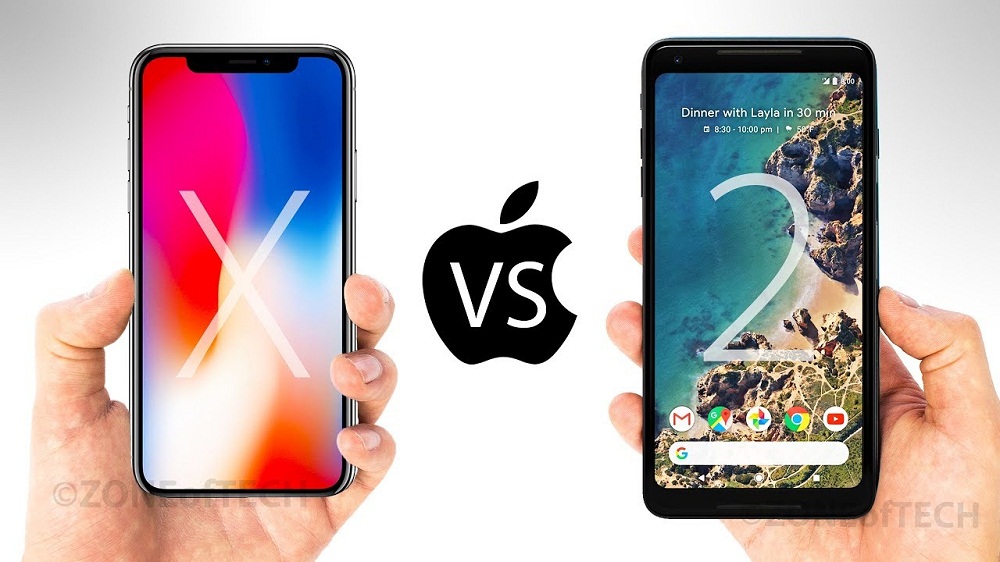 After Apple’s riveting launch of the unprecedented iPhone X last September, it was Google’s turn to introduce their latest flagship this month and it’s made for competition against the former.

The iPhone X with the latest iOS 11 was a steal if not for the hefty price tag, however, its camera features and new sleek design will easily neg you into getting in line at the nearest Apple store to test one personally and eventually, leave the store with your brand new iPhone.

On the other hand, the Google Pixel 2 XL doesn’t back down easily as its camera performance can go head-to-head with iPhone X’s for it boasts great quality and similar features as well. The flagship carries the latest Android 8.0 Oreo which is a steal for Android customers and a refreshing change for other smartphone users.

So, which phone is better and would suit you best? Here’s a ballpoint look at each handset’s feature on paper:

Apple is arguably ahead when it comes to design and simplicity of their products and it shows in the iPhone X. It has the sleekest design in the line (still debatable with regards to the notch). Much like other brands, Apple has ditched the home button for a larger 5.8-inch screen display.

The Pixel 2 XL doesn’t fall short on design either. Like the iPhone X, the Pixel 2 also joined the club of full-screen display—like many other brands that came before—with a 6-inch POLED display. The Pixel still retains the dual-tone rear which isn’t as pleasing to the eyes as the iPhone X, however, not that much a deal if you’re going to cover it with a case anyway.

The iPhone X runs on iOS 11 while the Pixel 2 XL runs on Android Oreo—two very different software that offer a different experience. No matter how long and detailed we describe both software’s features, it all boils down to the user’s personal preference. If you’re after personalization and customization, the Pixel 2 will work for you. If you want a simple yet functional aesthetic, the iPhone X will serve you best.

This is where both smartphones will compete head-to-head and where customers will most likely decide on (apart from other important factors such as the processor, battery life, etc.).

The iPhone X boasts a dual-rear 12-megapixel camera, a telephoto f/2.4 and wide-angle f/1.8 aperture, dual optical stabilisation, 7-megapixel with a f/2.2 aperture on the front camera, and it’s icing on the top: Portrait Mode and Portrait Lighting Mode feature.

The Pixel 2 XL comes with a 12.2-megapixel single rear camera with f/1.8 aperture and an 8-megapixel with f/2.4 aperture front-facing camera. It also features laser detection and dual pixel phase detection autofocus as well as optical and electrical image stabilisation. If you’re fond of selfies, this one won’t let you down.

Apple’s products are expensive so there’s no surprise that when they announced the iPhone X, it will come with a hefty tag at $999. The Google Pixel 2 XL, on the other hand, will retail at $849 for the 64GB variant.

Apple’s flagship is priced higher than Google’s offering. Though both handsets are expensive, it’s up to the consumer if they’re willing to invest that much in either model.

Verdict: Apple’s iPhone X and Google’s Pixel 2 XL are both high-end smartphones that offer premium experience and powerful performance. Both handset’s hardware, software, camera strength, display and design, and compelling features make them at the top of their game.

Beyond the features and price, the verdict all boils down to personal preference when it comes to the operating system: Android or iOS. Some find the customizability of Android more appealing while others think the simple and clean interface of iOS.

About the author: When she couldn’t be found eating pizza or indulging on sweets, Chie writes for Zapals — a global shopping site that sells anything and everything you need under the sun—from home appliances to electronic devices.